Family over everything. That’s Davien Powell’s mantra and the “why” behind his persistence in uniting his family of six under one roof, now in a four-bedroom home in southwest Fort Worth and in the Crowley Independent School District. 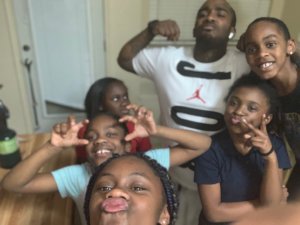 Powell, 32 and an Arlington Heights High School alumnus, was determined to win custody of each of his children after relationships ended and one child was injured in a domestic altercation.

Powell navigated through years of court battles and met many roadblocks, he says. But in 2014, the single father met a patient caseworker who told him about HUD’s Family Unification Program, which provides vouchers to eligible parents who could not afford housing for their children otherwise. Clients must be referred to the program by the Department of Family and Protective Services.

Today, his children are enjoying a break from last spring’s online school while he pursues his commercial driver’s license and a new career.

“I feel like I’ve overcome a lot,” he says. “There were a lot of times I thought I couldn’t do and bit off more than I could chew.

“At the end of the day, I knew that these were my kids, my responsibility… This program has kept us together and kept us thriving as a unit.”