Terri Attaway has advocated for affordable housing in Fort Worth throughout her career. A dedicated civic leader with an extensive background in real estate and homeownership, Mrs. Attaway coined the phrase “Changing the Face of Public Housing” to quickly explain the former Fort Worth Housing Authority’s transition from public housing to the sustainable, beautiful mixed-income communities it develops today. 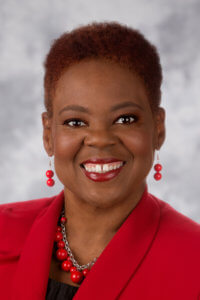 “We wanted people to be proud of where they live,” said Attaway, who has served as a housing commissioner for more than two decades. “When we said that, we meant that we wanted people of all incomes to have options for where to live all across the city.

“I’m so proud that we own multifamily properties in every City Council district in Fort Worth. Not many cities can say that.”

Attaway was appointed to the Fort Worth Housing Solutions’ Board of Commissioners in 1998 by former Mayor Kenneth Barr. The late Devoyd “Dee” Jennings, a longtime president and CEO of the Fort Worth Metropolitan Black Chamber of Commerce, and Larry Duckworth, former Omni American president, also recommended Attaway for the appointment. She has served as the Board’s chairwoman since 2010.

Despite her background in the mortgage, title and affordable housing industry going back to the 1980s, Attaway said she did not know much about public housing and housing assistance when she joined the Board. That changed quickly.

“As I learned more, how can you not care about this? You want people to come off public assistance and become self-sufficient.”

Under her leadership, the agency – now known as Fort Worth Housing Solutions — has closed all three of Fort Worth’s former, red-brick public housing communities – Ripley Arnold Place, Butler Place and Cavile Place. The sale of Ripley Arnold in 2001 was a watershed experience for Attaway.

“That was my first major development that I was a part of,” she said. “We sold it for a higher price than the appraised value. What we did was so important. We were pioneers in this kind of thing.”

The mission was to move former residents of those communities to homes of their choice in areas of higher opportunity with better access to jobs, good schools and transportation. “Deconcentrating poverty” is at the heart of Fort Worth Housing Solutions’ efforts.

“We didn’t want to ever concentrate low-income people in one place again,” she said.

Today, FWHS owns 38 mixed-income, multifamily communities and a total 6,797 units offered at affordable and workforce rents throughout Fort Worth. Participants in FWHS programs are provided opportunities to increase their education and technical skills, improve financial literacy, and move toward self-sufficiency and homeownership.

“I want children to live in place where they can grow up differently than they may have done before,” Attaway said.  “The goal is to expose, educate and elevate.”

Mrs. Attaway has spent the bulk of her professional career with American Dream Companies. She’s also worked with the Small Business Administration Disaster Recovery Division in 2006 and 2010, providing residential and commercial underwriting decisions for victims of Katrina and Sandy storm disasters.

A native of Jacksonville, Fla., Attaway moved to Texas with her family when she was 8 years old. She lives in Fort Worth with her husband Major Attaway, former Director of Development for the Fort Worth Metropolitan Black Chamber of Commerce. Their son, Major Attaway, is a New York-based actor.