With determination, Katrina Jenkins had earned certifications early in her career that helped her land jobs as a multi-skilled medical technician. While she enjoyed working in action-packed places like hospital telemetry and NICU floors, her hourly wages made it tough to make ends meet. 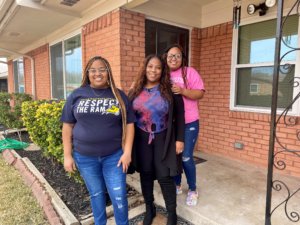 Jenkins had watched a cousin buy her own home through the FWHS Homeownership program, and she decided she wanted that for her family, too.

“Don’t ever let anyone tell you that you can’t do something,” said Jenkins, who closed on her own home in south Fort Worth on Dec. 29. “Always set goals. If you put your mind to it, you can accomplish them. If I can do it, you can do it.”

The path hasn’t been easy. Jenkins grew up in a household that depended on rental assistance and moved frequently. As her own family grew, she also enrolled in housing programs and qualified for a voucher that helped cover her rent on a four-bedroom house in southeast Fort Worth.

Jenkins determination only grew from there. She and her five children committed themselves to work hard to make a better life.

Her 20-year-old twins are completing criminal justice undergraduate degrees at Texas Wesleyan University and plan to graduate early this December. Her 16-year-old daughter and 17-year-old son are doing well in school, and her 7-year-old daughter is earning straight A’s at a competitive preparatory school in Fort Worth.

Jenkins, a 2002 Trimble Tech High School graduate, completed the FWHS Family Self-Sufficiency program herself and worked with agency specialists to increase her income and ultimately find a permanent position as a Bank of America customer service representative.

A promotion followed, and soon Jenkins faced a choice: move to another, more expensive rental unit based on her income and voucher requirements, or search for a home to buy through the agency’s Homeownership program.

“At first, it was hard to find a house because prices were rising so fast,” Jenkins said. “I looked at several houses, but most people selling wanted cash. The house I found, the previous owner had passed away and the family was in a hurry to sell it… It needed some repairs, and ultimately the seller put $3,000 down.

“When we closed, it was such a relief!”

The FWHS Homeownership program allows participants to pay 30 percent of their adjusted gross income toward a mortgage payment. FWHS covers the remainder through the federal Housing Choice Voucher Program.

“It’s a great opportunity,” Jenkins said. “Everything that I have learned, I am instilling in my children so they will have a better start.”