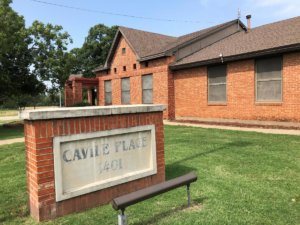 Many residents remember the red brick J.A. Cavile Apartment public housing community that stood at East Rosedale Street and Amanda Avenue from December 1953 until April 2021. But fewer recall the man for whom the development was named and the history behind his name.

A detailed description of the life of James Anderson Cavile is included in the 1907 History and Directory of Fort Worth: A Directory of the Colored Business, Societies, Clubs Churches, etc. published by J.A. Hamilton, and supported by other sources.

Mr. Cavile was born a slave on Oct. 16, 1840 in Limestone County, Ala., near the Tennessee River. He was one of 175 people owned by Nathaniel Terry, a wealthy farmer, until the Civil War ended in 1865.

As a teen, Mr. Cavile drove a carriage and distributed the mail for free to farmers in his neighborhood, and later was hired out to help open a railroad. He took on the extra duty of rising early to awake the other hands, earning $15 over his owner’s fees, which he was allowed to keep.

Mr. Terry’s fortunes declined over the years, and he was forced to sell the majority of his slaves to cover debts. He and Mr. Cavile moved to Fort Worth on Oct. 31, 1854, settling at Herman Park, halfway between the Tarrant County courthouse and the north side meat packing houses.

By 1861, America had erupted into Civil War, fueled by long-running tensions between northern and southern states over slavery, states’ rights and westward expansion. White soldiers were scarce in Fort Worth at the time, so Mr. Cavile and 2,000 other African American men were conscripted to serve in the Confederate Army as commissary men, teamsters, ditchers and laborers through the end of the fighting.

Army troops remained in Fort Worth to protect the city. On a foggy morning in 1867, a group of 36 Native Americans raided a site near the Fort Worth packing houses, capturing a bunch of horses and a saddle.

When word reached Mr. Cavile, he and a band of troops then under his command were dispatched to chase the attackers. Mr. Cavile would drive a group of Native Americans from Fort Worth to the Table Mountains in Jack County – the last recorded raid by Native Americans on Fort Worth.

Three years later, Mr. Cavile purchased Block 30 between Weatherford and Second streets for $220. He made his home at 907 E. First St., where he lived with Nancy Johnson, his first wife, and their six children until she died of measles. He married Hannah Adams in 1879, and the couple raised another five children. Accounts say that all Mr. Cavile’s children had a “common school education.”

Politics and a Lasting Impact

During the decade known as Radical Reconstruction (1867 to 1877), Congress granted African American men the status of citizenship and the right to vote. In Fort Worth, Charles Caldwell Cummings, a lawyer and local historian, decided to run for County Judge. He turned to Mr. Cavile, by then a leading black businessman, to help turn out the African American vote. In return. Mr. Cummings promised to establish the first schools for black children in Tarrant County.

Mr. Cummings won the 1876 election and made good on his promise, appointing Mr. Cavile as president of a board of African American trustees for Tarrant County schools. Mr. Cavile went on to organize four schools in Fort Worth, one northeast of the city on Village Creek, another in Mosier Valley to the east; and others at Johnson Station, Mansfield and White Settlement. He served as a school trustee for several years under Judge Cummings.

Hamilton, J. A. History and Directory of Fort Worth: A Directory of the Colored Business, Societies, Clubs Churches, Etc., . J.A. Hamilton, 1907. http://archive.org/details/historydirectory00hami/page/48/mode/2up?view=theater